Nail-biting thrillers where a team wins by the barest of margins are something that every cricket fan loves. Since the introduction of Super Over in OneDay international, the close finishes have gotten more dramatic over the years. The pressure everyone feels, including the fans, during the last few balls of a close ODI match is just an unparalleled experience. These closest ODI matches have kept the fans hooked on cricket for years. 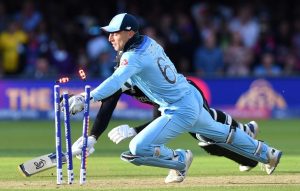 England scored 15 runs in the super over, and New Zealand also managed the same. On that occasion, cricketing fans realised that there is a rule which states that the team with the more boundary count would be declared the winner in case of a tied super over. New Zealand was heartbroken while England celebrated its first-ever 50 over World Cup trophy.

Pakistan was leading the series by7 2-0 before the 3rd ODI match. The match was reduced to 44 overs per side due to rain. India batted first and posted 212 runs on the back of Ravi Sashtri and Kapil Dev’s half-centuries. In reply, Pakistan was dominant in the start as Saleem Malik played a blazing knock of 84 runs. However, Saleem was dismissed by Gopal Sharma, and India made a comeback in the game.

Two runs were required off the last ball, but Pakistan could only score 1, and the match was tied. Later it was announced that India had won the match due to losing fewer wickets than Pakistan. Until the last ball in the game, India and Pakistan had lost only 6 wickets each in their inning. However, the Pakistani batters tried to win the match by running two on the last ball, which gave the Indians an extra wicket that ultimately led to their win.

This ODI between Australia and Pakistan was initially supposed to be played a day later, on October 15th, but it was rescheduled due to the rioting. The game had all the thrill and drama to make it one of the closest ODI matches ever. The match was played with 45 overs per side.

Australia batted first and posted 229/8 in 45 overs. Pakistan also finished with 229 runs in 45 overs, but the Pak cricket team lost one wicket less than their opponent. According to the rules of that time, the team which lost fewer wickets was crowned the winner in case of a tie. Pakistan was declared victorious. Before the inexperienced Indian team breached the fortress of Australia, the Zimbabwe cricket team almost did the unthinkable in 2001. The Kangaroos won the match by only 1 run. The Zimbabwe players gave Australia a tough fight in their own backyard.

The Australian team had scored 302/6 in 50 overs on the back of an excellent unbeaten hundred from Damien Martyn. All the cricketing experts thought that the match was already over. But the Zimbabwe players were not ready to give up, and their monumental effort turned the game into one of the closest ODI matches ever. Stuart Carlisle notched up 119 runs while Grant Flower played a brilliant knock of 85 runs. Zimbabwe required three runs to win the match on the last ball, but the Australians were able to restrict them to only a single.

India was excellent in 2011 50 over World Cup. They ultimately won the trophy by defeating Sri Lanka in the final. However, before India went on to script history, it had a roadblock in its journey. The group stage match between India and England was perhaps the match of the tournament with its high thrilling drama.

India scored 338/10 in 49.5 overs after a brilliant ton by Sachin Tendulkar and a handsome half-century by Yuvraj Singh. In reply, England chased with intent. Andrew Strauss, the English skipper, put on a batting exhibition to score 158 runs in the chase. Ian Bell also contributed 69 runs. Zaheer Khan dismissed Strauss in the 43rd over to bring India back into the game. In the end, England finished with the exact same total, and the match was tied. Both teams were awarded one point each.

Australia and South Africa have one of the fiercest rivalries in world cricket. In the 2005/06 tour, the series was levelled at 2-2. The final ODI of the series is still considered one of the greatest ODI matches ever in the history of cricket. A total of 869 runs were scored in the game, which is still a world record.

Australia batted first and posted 434/4 in 50 overs. Ricky Ponting played a destructive knock of 164 off 105. He received support from all the other batters who continued the momentum. Adam Gilchrist, Simon Katich and Micheal Hussey all scored half-centuries to power the Kangaroos to a total which seemed improbable to chase.

However, there was a twist in the tale as Graeme Smith led South Africa did not give up and forced their way towards one of the greatest victories ever in ODI cricket. Smith led the charge from the front by scoring 90 in just 55 balls. Herschelle Gibbs was the star for Proteas with the bat. He played a magnificent knock in which he smashed 175 runs in just 111 balls. In the end, Mark Boucher scored an unbeaten 50 to take South Africa home. The Proteas won one of the closest ODI matches by just 1 wicket and 1 ball to spare. India vs Sri Lanka played a match that was filled with vital and crucial moments that ended up being the reason for India’s victory. Sri Lankan batters were on fire in perhaps one of the greatest chases ever before Sachin Tendulkar pulled off a miracle run-out for team India.

The high-scoring game saw India bat first and post 414/7 in 50 overs. Virender Sehwag was unstoppable in his knock of 146 runs. MS Dhoni and Tendulkar contributed 72 and 69 runs, respectively, to help Men in Blue reach the gigantic total of 414 runs. In reply, the top three Sri Lankan batters played such exquisite knocks that India was almost pushed to the brink of an unexpected defeat.

Tillakaratne Dilshan’s blistering 160 off 124 in combination with Upul Tharanga’s 60 runs and Kumar Sangakkara’s 90 set the stage for Sri Lanka to win the match. Sri Lanka only required 15 runs in the last two overs with two set batters, Angelo Mathews and Thilina Kandamby, on the crease. On the second ball of the 49th over, Tendulkar effected a run out which sent back Kandamby. This became a turning moment in the match as the Lankan lions kept losing wickets and fell short by 3 runs.

A thrilling match that England won despite two set batters for South Africa being left on the crease. The ODI was a high-scoring game in which both teams smashed sixes and fours for fun. England won the match by only 2 runs to ultimately gain the unassailable lead of 2-0 in the three-match ODI series.

South Africa had elected to field first, and England made the most of their batting chance. Ben Stokes delighted the fans with his fearless strokeplay. He ended up with 101 in just 79 balls. Jos Buttler was equally effective for England as he remained unbeaten on 65* off 33. England finished with 330/6 in the 50 overs.

Chasing 331, the South African team needed its batters to fire. Quinton de Kock played an outstanding inning but fell two short of a hundred. AB de Villiers smashed 52 off 50. After him, David Miller and Chris Morris controlled the chase for Proteas. At the end of the 49th over, South Africa needed only 7 runs to win, with David Miller on 69 off 48 and Morris on 34 off 19.

The last over was filled with drama as Mark Wood successfully managed to pull off one of the greatest heists ever in cricket history. He only gave away 4 runs to win the match for his team by 2 runs. The Proteas fans were left disappointed and dejected.

The 7-match ODI series between India and Australia was filled with controversy and drama. India ultimately won the series by 4-3 but tasted a defeat in the 5th match of the series that made Australia gain the lead by 3-2. The match was a thrilling encounter in which Sachin Tendulkar reigned supreme despite India failing to achieve the target. Tendulkar was named player of the match for his magnificent knock of 175 runs.

In one of the closest ODI matches ever, Australia batted first and posted a massive total of 350/4 in 50 overs. Shaun Marsh scored 112 runs while Shane Watson fell short of a blazing ton by just 7 runs. Ricky Ponting, Cameron White and Micheal Hussey powered the Australian innings with glorious shots.

India needed 351 runs to win the game. Sachin Tendulkar, the greatest ever batter in cricket history, took it upon himself to lead India towards a victory. However, he was dismissed on 175 runs by Clint McKay. Suddenly, Australia found the energy to make a comeback in the game while India slumped into the deep dark corner. When Tendulkar lost his wicket, India required only 19 runs in 17 balls. However, ultimately Australia won one of the closest ODI matches by 3 runs by restricting other batters.

Australia is continuously on this list due to the number of close ODI matches they have snatched out from the opponent’s jaw. Another game that proved the dominance of the Australian cricket team in the 2000s. The side led by Ricky Ponting never gave up and had the courage and skill to make a comeback from any point of the game.

The Kangaroos were batting first and found themselves in a spot of bother when 5 wickets were down for just 101 runs in 21.2 overs. However, Andrews Symonds and Micheal Clarke stitched together a partnership of 220 runs to take Australia to the winning total of 322 runs. Symonds scored 156 off 122, and Clarke remained unbeaten on 82*.

Kiwi opener Lou Vincent started positively and scored 71 off 49 to keep New Zealand in the hunt. However, wickets kept tumbling on the other end, making the Kiwi chase harder. Chris Cairns and Jacob Oram stitched a crucial partnership which was followed by the assault from Brendon McCullum. Clarke ran out the dangerous McCullum in the last over to help Australia win the game by 2 runs.