India Deflates England to take 1-0 Lead in the Series India defeated England by a massive margin of 50 runs to take the lead in the three-match T20i series. Hardik Pandya was the star for India with both bat and ball. He scored a vital half-century while taking up 4 wickets as well. Pandya became the first-ever Indian cricketer to notch up a half-century and pick 4 wickets in a T20i match for India. Meanwhile, Rohit Sharma became the only skipper in T20i history to guide his team to 13 consecutive wins.

Earlier in the day, Sharma won the toss and elected to bat first. He was nicely setting up the tempo for Indian batters before being dismissed on 24 runs by Moeen Ali. Ishan Kishan did not fare well from the other end and accumulated only 8 runs in his short stay at the crease. 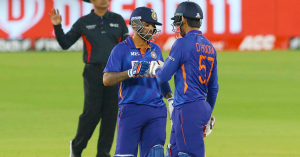 Deepak Hooda and Suryakumar Yadav were brilliant for India in the middle overs. Hooda played a blazing knock of 33 off 17 with 3 fours and 2 sixes, while Yadav found his mojo back and smashed 39 off just 19. Yadav was at his best and played a handsome flick shot that is sending social media into a frenzy. Chris Jordan was the one to send them both to the dressing room. After Hooda and Yadav, it was the Hardik Pandya show for the rest of the match. Pandya plundered the English bowlers to get to 51 off 33. He ensured that India finished with more than enough to contain England batters. Dinesh Karthik and Axar Patel made only 11 runs each. The Indian cricket team got to 198 runs in the 20 overs.

Chasing a huge total, England needed its openers Jason Roy and Jos Butter to fire. However, Buttler was sent back to the pavilion for a golden duck by Bhuvneshwar Kumar. Meanwhile, Arshdeep Singh proved his mettle by bowling a maiden over in the powerplay. Jason Roy played an uncharacteristic inning of 4 runs off 16 balls. Moeen Ali and Chris Jordan were the only two convincing batters for England. However, their short bursts were not enough for England to register victory over India.

Pandya took 4 wickets for 33 runs in his four overs, while Chahal and Arshdeep picked 2 wickets each.

Also Read: Top Reasons Why India lost Against England in the 5th Test