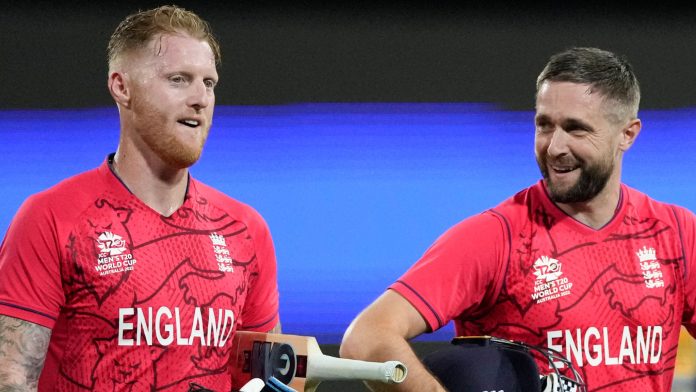 In a super 12 game of the ongoing T20 World Cup, England defeated Sri Lanka by four wickets to qualify for the semifinals and this now eliminated defending champions Australia from the tournament.

After winning the toss Sri Lanka opted to bat first and put in a total of 141/8 with Pathum Nissanka’s 67 of 45 balls England chased down the target in 19.4 overs with Stokes carrying the run chase on his shoulders and scored an unbeaten 42 off 36 balls and Alex Hales scoring 47 off 30.

Srilanka was off to a flying start and later on, Mark Wood’s spell of 3/26 helped them to restrict under 150. Chasing this target, English openers put up a partnership of 75 runs from 43 balls, but as we said earlier Hasaranga will be Sri Lanka’s go-to bowler and in no time when they just needed 67 from 77 balls half of the English side were down to a collapse. But England’s test skipper took the responsibility and helped them to win with a 15-run partnership with Chris Woakes in the end.

Now, from group 1 New Zealand finishes the to with England in the second position and now everyone has their eyes on Sunday when it will be revealed who will qualify for the semis with them.