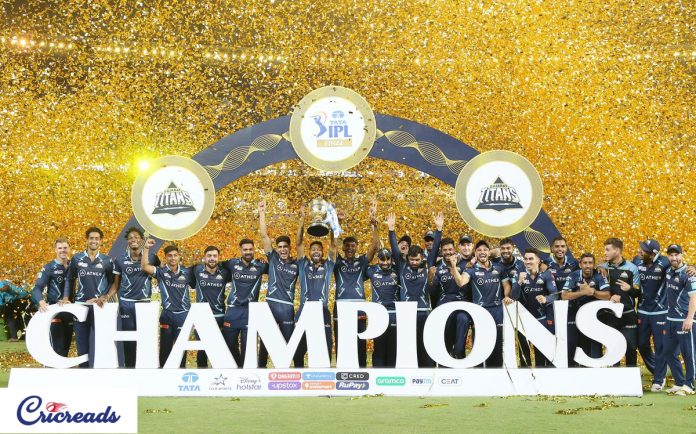 Gujarat Titans, the newly born franchise captained by Hardik Pandya and mentored by Ashish Nehra surprised everyone with its great run in Tata IPL 2022 which ultimately culminated with the IPL trophy for the team.

Gujarat Titans faced off Rajasthan Royals for the coveted title of champions. Sanju Samson, the skipper of Rajasthan Royals won the toss and opted to bat first. A decision which surprised many viewers because until then Rajasthan had preferred to chase the target whenever they won the toss. However, RR’s think tank cited that the pressure of playing in the IPL 2022 final was much bigger than any other match they had played so far in the tournament and therefore batting first was a tactical decision. 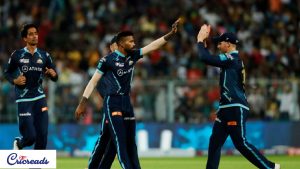 Rajasthan kicked off their inning with the trademark style of going after the bowlers. Yashasvi Jaiswal scored a quick 22 runs off just 16 deliveries. He was dismissed by Yash Dayal. Sanju Samson succeeded him on the crease to partner Jos Buttler. Samson could not do much for his team as he was sent back on a paltry score of 14 runs by Hardik Pandya. Devdutt Padikkal had a forgettable experience in the final. He played a stagnant knock of 2 runs in 10 balls. The ace spinner Rashid Khan was the one to pick his scalp.

Jos Buttler who was motoring along at a smooth pace was removed as the GT captain to put the final nail in the coffin for Rajasthan Royals. After Buttler’s departure RR batting line-up collapsed like a pack of cards. Shimron Hetmyer and Riyan Parag could not provide a strong finish for the Royals. GT restricted them to a meagre score of 130/9 in the IPL 2022 final. While chasing a small and tricky total Gujarat was in a pinch when they started their chase. Wriddhiman Saha and Mathew Wade could not get to the double figures. Shah was bowled out by Prasidh Krishna while Wade was sent back by the veteran swing bowler Trent Boult. The two early hiccups provided RR with a chance to make a comeback in the game.

However, Hardik Pandya and Shubman Gill formed a stand of 63 runs for the 3rd wicket to almost ensure the victory for Gujarat Titans in the finals. Pandya notched up 34 off 30 before he was dismissed by the leg spinner Yuzvendra Chahal. His departure brought in the hero of qualifier 1 to the crease.

David Miller joined Shubman Gill in the middle and helped his team comfortably reach the RR total. Gill smashed a six on the first ball of the 19th over bowled by Obed McCoy to register the victory for Gujarat Titans. Miller remained unbeaten on 32* off 19 while Gill was not out on 45* off 43. Gujarat Titans won the IPL 2022 finals by 7 wickets.

Hardik Pandya was adjudged player of the match for picking up 3 wickets by giving up only 17 runs in his quota of 4 overs.

Player of the Tournament– Jos Buttler for his 863 runs which included 4 centuries.