Gujarat Titans have looked like a complete team in the initial phase of the tournament. They have won both of their matches by playing good cricket in all three departments. Shubman Gill came back to form with an electrifying half-century against Delhi Capitals. Hardik Pandya is captaining the side with calm and composure. They can win the key moments within the game.

Mohammed Shami in the bowling department has been phenomenal for them. The pace star has garnered wickets to put his team on the front in the powerplay. With Marcus Stoinis available to play in GT vs DC encounter at Barbourne Stadium, Gujarat clicks all the boxes as a team.

On the other hand, Punjab Kings have won 2 out of the three matches they have played in the tournament. Liam Livingstone’s return to the form against Chennai Super Kings has made them much more formidable. Jitesh Sharma’s inclusion in the middle-order has provided them with needed stability and firepower in the death overs.

However, captain Mayank Aggarwal has yet to fire in Tata IPL 2022. Shikhar Dhawan at the top is also having a regular tournament by his standards in the last three editions. They need their opening duo to come to the party if they want to triumph in the GT vs PBKS clash on Friday. 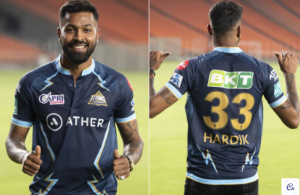 Hardik Pandya, the skipper for Gujarat Titans, is batting at number 4 in Tata IPL 2022, and it’s just a matter of time when he plays that big inning that will destroy the opponents’ will. He is our best bet to score most runs in the GT vs PBKS clash.

Mohammed Shami is shining bright in the tournament, and he is our pick of the bowlers for the GT vs PBKS battle.

Gujarat Titans will probably win the match and become a dominant force in Tata IPL 2022.