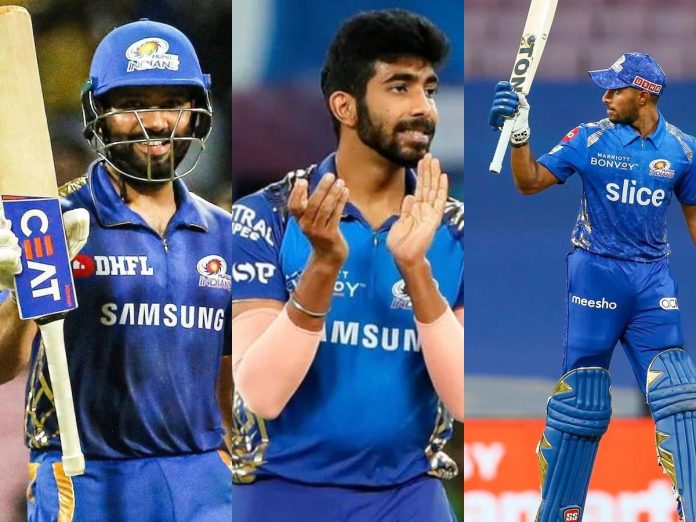 One of the reasons for the Mumbai Indians success is their ability to retain the core group of players year after year. They have been able to do this by using the IPL’s player retention policy to their advantage.

7 Mumbai Indians players who will be retained in IPL 2023 Auction:

Rohit Sharma is one of the most successful batsmen in the history of the Indian Premier League. He is the 3rd all-time leading run-scorer in the IPL, with 5,879 runs from 227 matches. Rohit is also the captain of the Mumbai Indians and has led them to 5 IPL title trophies. There is no doubt that he will be retained by the Mumbai Indians in the IPL 2023 Auction.

Suryakumar Yadav is arguably one of the most complete batsmen in world cricket right now, capable of hitting 360-degree shots across the stadium. He is a dangerous player because of his ability to hit big and unique shots. SKY made his debut for the Mumbai Indians in 2012, but he only played one match that season and was out for a duck. Later, he was a member of the Kolkata Knight Riders, but in the IPL Auction 2021, the Mumbai Indians bought him back, and he has been a regular member of their squad ever since. SKY has appeared in 69 matches and scored 2036 runs. He will undoubtedly be retained by the Mumbai Indians ahead of the IPL 2023 Auction.

Ishan Kishan was one of the star players for Mumbai Indians in 2020. Batting at 3, he scored 516 runs from just 15 matches and played several important knocks for MI which helped them win the IPL 2020 title. Kishan is still young and has a lot of potentials. The Indians paid a whopping 15.25 crore for him in last year’s IPL Auction, and he will continue to improve with each match he plays. As a result, we believe Ishan Kishan will be retained by MI ahead of the IPL 2023 Auction.

Jofra Archer is a quality, fast bowler who can trouble any batsman on his day. Archer was one of the reasons behind Rajasthan Royals good performance in the IPL. The MI Paltan picked him in last year’s IPL Auction. However, he couldn’t join the team last year. But this year, the deadly combination of Jasprit Bumrah and Jofra Archer will be interesting to watch this year. Archer will be a member of the MI team in the IPL 2023 season and will almost certainly be retained by them.

The Mumbai Indians have always placed their trust in young players, and Dewald Brevis is one such example. Dewald, who is only 18 years old, was paid a handsome Rs 3 crore by the Mumbai Indians to be in their corner following a high-voltage bidding war against the Lucknow Super Giants. And that’s why once again, they will keep this youngster on their roster.

Tilak Varma is the discovery of the U19 World Cup, and he has also proven his worth in the IPL. Despite the fact that the Mumbai Indians did not make the playoffs in the 2022 IPL season. Tilak Varma, on the other hand, wowed everyone. He appeared in 14 IPL matches, scoring 397 runs in 14 innings. His best IPL score is 61. In last year’s IPL, he scored two half-centuries, five 30+ runs, and four 20+ runs. As a result, he will also be retained for this season.

Breaking: Jasprit Bumrah Ruled Out of T20 World Cup Due to Stress Fracture