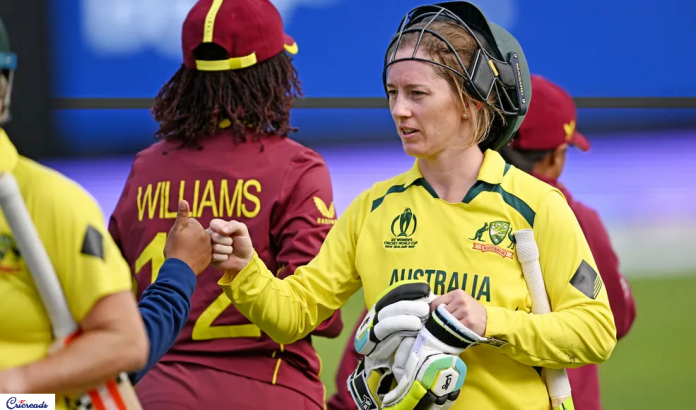 AUSW vs WIW, Match 14th of the ICC Women’s Cricket World Cup, continued the dominance of Australia in the ongoing tournament. The kangaroos defeated the Caribbeans in a lop-sided match by chasing down measly 132 runs in just 30.2 overs with 7 wickets to spare.

The table-toppers sits comfortably at the summit with 4 wins out of 4 games and a boasting net run-rate of +1.744. On the other hand, West Indies Women have slipped at the 4th position in the points table with 2 wins and 2 losses each in 4 matches. Windies have the worst net run rate of -1.233 among all the teams in the tournament.

Windies captain Stefanie Taylor won the toss and elected to bat first, a decision that she ended up dreading at the end.

West Indies had a horrible start; they lost the opener, Hayley Mathews and number three Kycia Knights for ducks. Under 10 overs, they found themselves struggling at 34-3 with Deandra Dottin back in the pavilion as well after scoring 16 off 36.

Ellyse Perry accounted for all top three of the West Indian batters. The Caribbean skipper combined with the wicketkeeper batter Campbelle to put up a slight resistance. The duo formed a 36 run partnership for the fourth wicket. Stefanie Taylor was the lone warrior for the Windies side with her score of 50 off 91.

Ultimately they collapsed for 131 runs in 45.4 overs to set a target of 132 for the Australian women.

Australian opener Rachel Haynes played a superb knock of 83* in 95 balls, including nine fours to guide her team to an easy win. Australia lost three wickets in total to chase down the target. Beth Moony also scored an unbeaten 28* off 42 in her team’s victory in 30.2 overs.

Player of the Match: 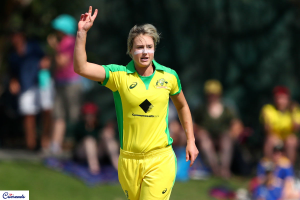 Ellyse Perry was adjudged player of the match for her three wickets at the top to put the West Indian innings in the shambles.

What’s Next for AUSW and WIW:

AUSW vs WIW was an encounter worth forgetting for Stefanie Taylor and co. They will face Bangladesh on 17th March while Australia will go against Indian women on 18th March.