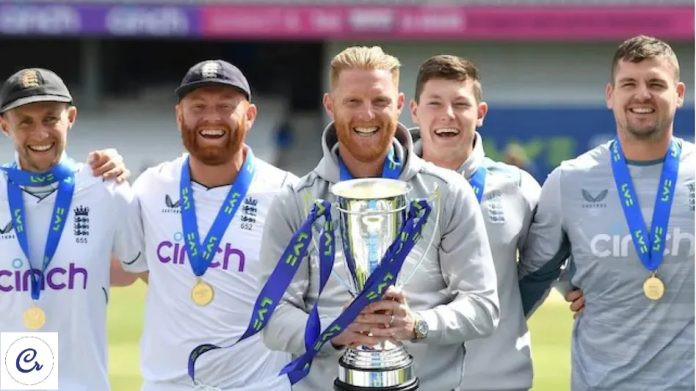 Ben Stokes led England has defeated the current World Test Champions New Zealand in the third Test of the series to register a victory of 3-0. England once again chased a huge total with urgency and ease to win the final Test. Here’s how the final Test took place:

Daryl Mitchell and Tom Blundell were again the saviours for Kiwis. Mitchell scored a hundred while Blundell brought up a half-century. New Zealand posted 329/10 in their first inning. Jack Leach was the star of the bowlers. He picked up 5 wickets. Stuart Broad was also effective as he dismissed three batters. England had a rocky start, with their top four failing in the first inning. However, Jonny Bairstow took over the command of the batting line-up with debutant Jamie Overton to help his team overcome the total of New Zealand. Bairstow scored 162 off 157 while Overton played a gritty knock of 97. A flurry of shots from Broad at the end ensured that the English team finished with a lead of 31 runs. Broad scored 42 off 36. Tren Boult was the most successful bowler for New Zealand as he dismissed four batters.

Tom Latham showed his skills and contributed 76 runs. Williamson also played a handy knock of 48 runs. Mitchell and Blundell were again the saviours. Mitchell scored 56 while Blundell remained unbeaten on 86. New Zealand put on 326 runs at the board to set a target of 296 runs for England. Joe Root and Ollie Pope ensured that England easily won the Test match. Both of them scored individual half-centuries. Once Pope was dismissed, Bairstow came out and blasted 71 runs in 44 balls to take his team home.

Previous article
Eoin Morgan to Retire, Know Who will Captain the England Cricket Team
Next article
Interesting Facts We Bet You Didn’t Know About Virat Kohli