Yuzvendra Chahal bowled a brilliant spell of 3 overs in which he gave away only 11 runs and picked up a wicket. Deepak Hooda was equally fantastic for India with his unbeaten knock of 47* off 29, which included 2 mammoth sixes and 6 fours.

The first T20i between India vs Ireland was reduced to 12 overs per side due to the rain. Indian captain Hardik Pandya announced that Umran Malik would make his debut in the match. Meanwhile, Deepak Hooda and Suryakumar Yadav filled in the places for Rishabh Pant and Shreyas Iyer. Hardik Pandya chose to bowl first due to the rain factor. Ireland had a sluggish start with Bhuvneshwar Kumar bowling a maiden over in his first spell of 2 overs. He gave away only one run in this spell while picking up the wicket of Andy Balbirnie.

Ireland was looking clueless about how to put up a good score against the Indian team before Harry Tector played a crucial knock. Tector was brilliant as he remained unbeaten on 64* off 33, which included 3 sixes and 6 fours. Yuzi Chahal managed to sneak in his overs even when Tector was going bonkers against others. 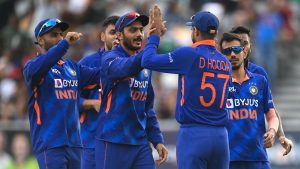 Tector single-handedly took Ireland to 108/4 in 12 overs. It was a respectable total, but it was not enough against the Indian batting line-up studded with hitters. Ishan Kishan began the proceedings for India in style. He smashed 26 off 11. Captain Pandya was also fabulous in his knock of 24 off 12, which included 3 massive sixes.

Deepak Hooda stayed till the end to ensure that India clinched the victory and went up 1-0 against Ireland in the series.

Also Read: Kohli or Bumrah, Who will Lead the Indian Team in Absence of Rohit Sharma

Previous article
Kohli or Bumrah, Who will Lead the Indian Team in Absence of Rohit Sharma
Next article
Eoin Morgan to Retire, Know Who will Captain the England Cricket Team