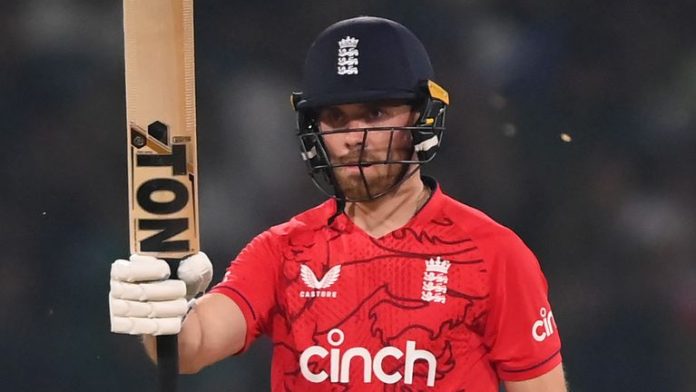 Philip Salt, the English opener, played a blitzing unbeaten knock of 87* off just 41 to help England level the ongoing T20i Series against Pakistan. With this victory, the Englishmen have perfectly set up the 7th T20, which is scheduled to take place on 2nd October as the series decider. Pakistan had batted first in the match to post 169/6, which proved to be too low for a victory. England comfortably chased the target in just 14.3 overs to win the crucial encounter.

Here’s how England defeated Pakistan in the 6th T20:

The English captain Moeen Ali had won the toss and opted to field first. His decision proved to be right as Pakistan could not post a big total on a batting pitch. Babar Azam was the most successful batter for the Pak with his 87 off 59. He smashed 7 fours and 3 sixes during his stay at the crease.

Babar’s partner and perhaps the most consistent batter in T20is nowadays, Mohammed Rizwan, did not play in this game. Mohammad Haris was given an opportunity to open the inning with the Pak captain, but he failed to emulate Rizwan’s success. The only other batter who showed some grit for Pak was Iftikhar Ahmed he scored 31 off 21. Pakistan posted 169/6 in their 20 overs. David Willey and Sam Curran took two wickets each for the English team.

Chasing 170, England needed a good start which was definitely provided by the duo of Philip Salt and Alex Hales. Salt, in particular, was unstoppable in the match. His fiery inning helped England reach 100 runs in just 7 overs. Alex Hales also contributed 27 runs while Dawid Malan and Ben Duckett scored 26 each for England’s win.

Philip Salt was named player of the match for his brilliant knock that raised the confidence level of the English team. He will be hoping to repeat the same success against Pakistan on 2nd October 2022.

Previous article
10 Special Things to Know About Team Affiliates, The iFest 2022 Champions
Next article
Miller’s 100 Goes in Vain as India Takes Unparalleled Lead in the Series