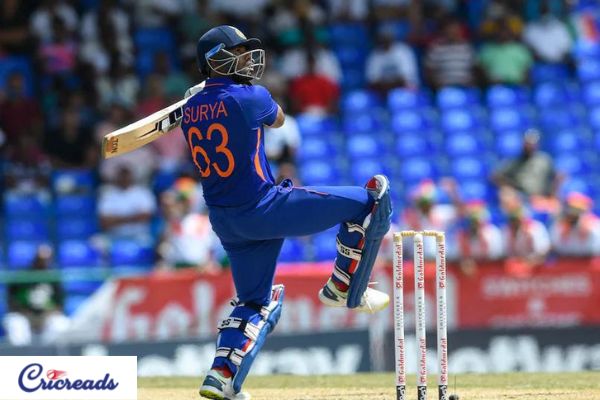 Suryakumar Yadav was the star for India in the 3rd T20I of the five-match series. India has taken the lead by 2-1 in the ongoing tour to West Indies. In the 3rd T20I, Rohit Sharma had won the toss and invited the Caribbean side to bat first.

West Indies had put 164/5 on the scoreboard in 20 overs. Kyle Mayers played a blazing knock of 73 off just 50. His inning included 8 glorious fours and 4 towering sixes. Shimron Hetmyer and Rovman Powell provided the finishing touch to West Indian batting by scoring quick 23 and 20 runs, respectively.

The Caribbean skipper Nicholas Pooran played a rather sluggish knock which hampered his team’s chance of putting a big score for the Indians to chase. Pooran contributed only 22 runs off 23 balls. Brandon King was also ineffective in his knock of 20 off 20.

The returning Bhuvenshwar Kumar took 2 wickets, while Arshdeep Singh and Avesh Khan managed to grab one wicket each. 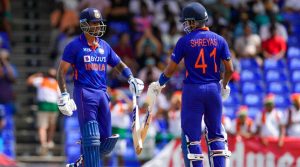 Chasing 165, India never looked in trouble as Suryakumar Yadav took the reigns of Indian inning in his hands. He notched up 76 runs in just 44 balls to guide India towards an easy victory. His knock included 8 fours and 4 massive sixes.

Rishabh Pant and Deepak Hooda finished the job for India after Suryakumar Yadav’s departure. Pant remained not out on 33 off 26 while Hooda stayed unbeaten on 10 runs. Shreyas Iyer played a slow knock but duly supported Suryakumar. He contributed 24 runs with the bat.

Unfortunately, the Indian skipper Rohit Sharma who was looking in fine touch, had to be retired out on 11 runs against the West Indies. Rohit pulled his back muscle, after which he had gone off the field. The Indian cricket board is looking after his health and will update us soon about his status for the 4th T20I.

Anyway, India won the game with one over to spare and took the lead in the series. With two more matches to go, can West Indies bounce back, or the Indian cricket team will seal the series in the next match?