1st Test Day 5: Aus vs Pak Culminates in A Draw

1st test between Aus vs Pak culminated in a draw on the 5th day after the hosts denied the visitors any chance to bat again. Pakistani openers, Imam-ul-Haq and Abdullah Shafique, put up an opening stand of 252* runs in 77 overs in the 2nd innings to register an end to the proceedings of the 1st test.

Carrying on from 449-7, the Australian batters surrendered against the class of Nauman Ali and Shaheen Afridi on a deck which is being heavily ridiculed in the press for being a highway track. Nauman partnered with Shaheen to swiftly bundle the Australians out in only 4 overs of the 1st session.

Imam-ul-Haq and Abdullah Shafique seemed in no hurry because they had no intention whatsoever to announce the declaration. Pakistani think-tank allowed its batsman to stat-pad on a pitch, curated for the batters’ delight. 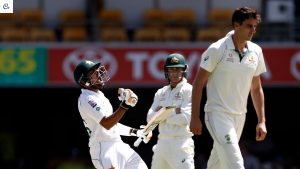 The track at Rawalpindi Cricket Stadium was an utter disappointment for cricket lovers. Fans of both teams must have hoped for an exciting game of cricket filled with jaw-dropping moments. However, the benign pitch at Rawalpindi demolished all the expectations for this historic test. Fast bowlers could only pick up 5 wickets in more than 150 overs they bowled in the 1st test.

2nd Test between Australia and Pakistan will be played in Karachi from the 12th of March. Fans and cricketers will be hoping for a pitch that can actually produce a result.