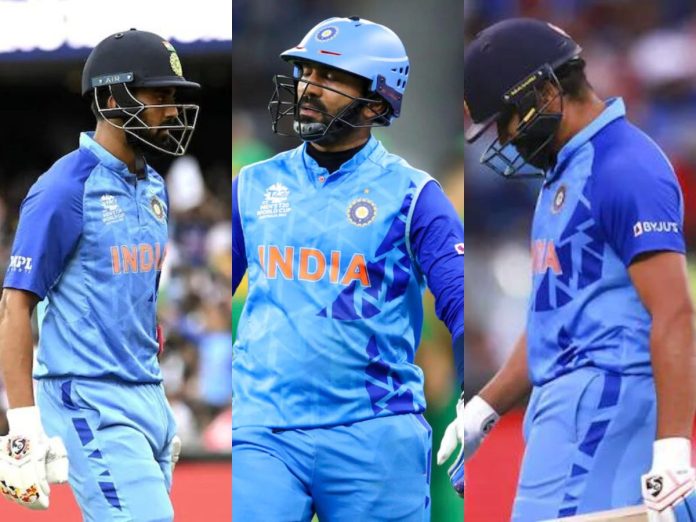 India suffered a huge loss against England in the semi-final of the T20 World Cup 2022. They have failed to retrieve the trophy again after 14 years of victory in this tournament. Now, many arguments and reasons are given for the crushing loss against England, but we all know that a few players should make the hard decision of retiring from the T20Is to give the younger generation a shot at lifting the World Cup trophy for India. T20 Cricket favours those who play their natural attacking game with freedom, and the Indian side needs to realise this as soon as possible.

Here are 7 Indian players who should retire from T20 internationals

The Indian skipper failed miserably in the T20 World Cup 2022. Apart from a half-century, he has nothing to do so far in this tournament. In the important semifinal, he was probably the biggest reason India ended up losing to the English side. He scored 27 off 28 on a batters’ paradise in Adelaide. All that talk surrounding his excellent captaincy skills should now also be put to rest he was clearly not the best captain in the tournament. Also, Rohit is already 35 years old; by the time the next T20 World Cup arrives, he will be 37 years old. Age is also not on his side. He should retire and make way for young talents like Sanju Samson or Ruturaj Gaikwad at the top.

Clearly, KL Rahul is not man-made for the T20 international. Even though he has all the shots in his book, his batting approach for playing in his shell in important games showcases that India can’t rely on him during big tournaments like T20 World Cup 2022. We need fearless batters like Ishan Kishan or Rishabh Pant at the top. Also, the Indian batting line-up needs a left-hander at the top. Rahul should consider playing T20 leagues and hanging up his boots in the T20 internationals. Unfortunately, he is not the big-match player in the shortest format of the game.

It really baffles us why Shikhar Dhawan has not yet retired from the T20 internationals. Indian team management has made it clear that they do not look at Dhawan as the opener in the shortest format of the game, and he is considered only for the One Day International nowadays. Dhawan is already 36 years old and will be 38 when the next World Cup takes place. There is absolutely no sense for him to continue playing T20 cricket for India.

The biggest mistake India probably made in this T20 World Cup 2022 was selecting Ravi Ashwin instead of Yuzvendra Chahal in the side. The Indian cricket team is so batting-conscious that they sometimes tend to ignore their bowling. In T20 cricket, bowlers are the ones who actually win you games. Batters can set the tone, but the bowlers will lead you to victory. Ravi Ashwin’s off-spin is utterly useless in T20 cricket. He is just playing as an extra batter who can bowl as well. Once Ravindra Jadeja returns, he will be out of the Indian setup. Ashwin should make for exciting young talent now.

Not the fairytale that Dinesh Karthik had hoped for in this T20 World Cup. He made a comeback in the shortest format of the game and was considered ahead of Rishabh Pant in the playing eleven for most of the T20 World Cup. But unfortunately, Karthik showed no promise at all as the finisher. He is quite a one-dimensional player that India clearly does not need in their T20 set-up. Dinesh Karthik is already 37 years old, and we don’t see him playing in the next World Cup. He should gracefully retire from the T20Is.

The peak of Bhuvi passed quite a long time ago. India is just somehow trying to benefit from his swinging abilities that come into play only in the first 2-3 overs of the game. In the death overs, he is not a specialist anymore. He goes for runs and is not worth playing anymore in T20 cricket. India needs to start grooming talents like Umran Malik, Mohsin Khan and more to wreak havoc at the next T20 World Cup.

The Indian fast bowler had a lacklustre outing in the T20 World Cup. After ignoring him for over a year, it was a completely wrong choice to bring him back into the T20 set-up. Clearly, India knew that Mohammad Shami was not cut out for the T20Is. Despite that, they took him to Australia due to the injury suffered by Jasprit Bumrah. Mohammed Shami should retire, and India should look at fresh options now and bring in bowlers who can attack the opposition.

Previous article
Virat Kohli Goes Past 4000 Runs in T20Is; The First Cricketer to Achieve the Landmark
Next article
Pakistan’s Bowling Coach Calls Indian Cricket Team a Disgrace after their Loss in Semi-Final

All You Need to Know About Athiya Shetty, The KL Rahul Wife (To Be)