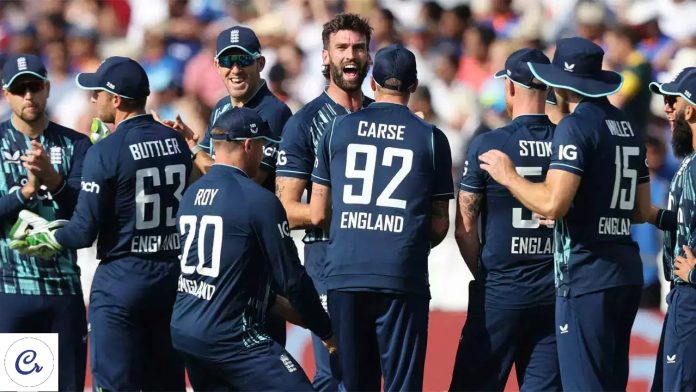 Reece Topley registered his best figures in OneDay International to make England win by a massive margin of 100 runs in the second ODI. With this win, the series is levelled at 1-1, and the third and final ODI of the series will serve as the tie-breaker.

India had won the toss and opted to field first. The Indian bowlers were fabulous again as they bundled out the English batting line-up for just a measly total of 246 runs. Yuzvendra Chahal was the pick of the bowlers for India. He picked four wickets and gave away only 47 runs in his 10 overs. Chahal picked the wickets of Bairstow, Root, Stokes and Moeen Ali. Bumrah, Hardik Pandya, Mohammed Shami and Prasidh Krishna were also among the wickets. Pandya dismissed the dangerous Liam Livingstone and Jason Roy. Moeen Ali top scored for England with 47 runs. David Willey was the second top-scorer with 41 runs. Livingstone contributed 33 while Bairstow played a handy knock of 38 runs. However, at the halfway mark in the game, England found themselves on the backfoot. Reece Topley turned it all around with his magnificent bowling. Topley sent back both the Indian openers and was also responsible for breaking a threatening partnership between Suryakumar Yadav and Hardik Pandya. He picked 6 wickets for 24 runs in 9.5 overs. Ravindra Jadeja equalled 29 runs made by Pandya before his departure to tie with Pandya as the top scorer for India. Nevertheless, the Indian cricket team managed only 146 runs. With this loss, England will be high on confidence going into the third and final match of the ODI series. The series decider will be played on the 17th of July.