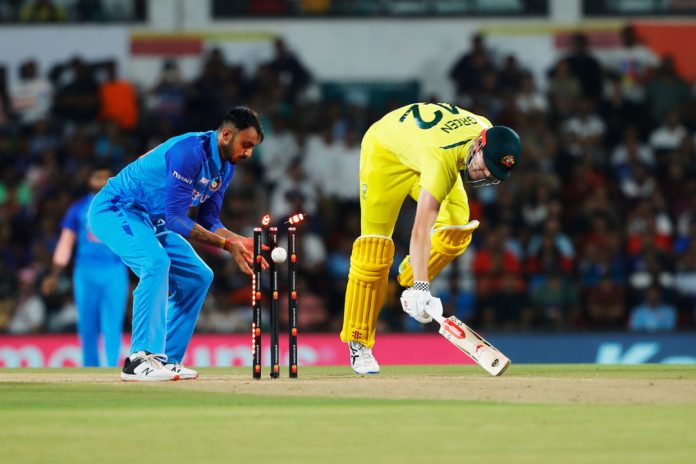 India won the 2nd T20I against Australia to level the series. The match was reduced to 8 overs, and India reached the target of 91 set by England in 7.2 overs owing to a fine performance by Rohit Sharma. The former Indian captain Virat Kohli did not have a great day with the bat in his hand. However, he did leave his impact in the field with a bullet throw that sent back the dangerous Cameron Green.

The destructive Aussie batter could have been a game changer if he was not dismissed early in his innings. He scored a brilliant half-century against India in the first T20I and secured the award for the man of the match. It was vital for India to dismiss the flamboyant player somehow.

The incident that we are referring to here happened in the 2nd over of the Australian inning. Rohit Sharma, the Indian skipper, made a gamble by choosing Axar Patel to bowl in the powerplay. He knew that Cameron Green would definitely go for a big hit, and there might be an opportunity to take his wicket in that situation. On the third bowl of Axar’s over, Cameron Green moved legside to smash the ball. However, he ended up mistiming it, and the ball went to the right of the fielder at mid-on. Virat Kohli was positioned there, and he moved as swiftly as a cheetah to collect the bowl to make an accurate bullet throw that Axar Patel collected and dislodged the bail with.

At first, the on-field umpire was not convinced of the run-out and decided to involve a third umpire in the decision. However, Virat Kohli was sure that India had got the wicket of Cameron Green. He raised his finger to let everyone know that the decision would be in India’s favour. As it turns out, Kohli was right, and Green was sent back to the pavilion.

Here is the video of the bullet throw by Virat Kohli that dismissed Cameron Green:

Don’t miss the LIVE coverage of the #INDvAUS match on @StarSportsIndia pic.twitter.com/j1h5bS1IVa

‘Need him to have an off day in semis’: Close friend and well wisher Pietersen hopes Kohli doesn’t fire